A father of seven has been able to tick off a major ‘bucket list’ activity thanks to the support of a local hospice.

Ray Mailley spent last week at Fair Havens. He has cancer and was admitted to get his pain medication under control. The 62 year old was taking a variety of medication prescribed by various consultants which was causing dizziness and hallucinations.

Ray, who lives in Westcliff, has a palliative care nurse that works with him in the community. Liaising with his wife, Jane, she referred Ray to Fair Havens for a medication review. The timing was important – Ray had a ‘bucket list’ event planned for 10th July, a ride on a steam train with Jane.

He says, “I was put into care from birth and fostered till the age of four. My maternal mother then collected me with my stepfather and brought me to Southend on a steam train. I remember it vividly. I haven’t been on one since. This is the only activity I’ve done since before the pandemic as I’ve sheilded the entire time.”

Ray was diagnosed with lung cancer two and a half years ago, but it has since spread to other parts of his body, including his spine and brain.

“I’ve avoided hospices like the plague. I always said I wanted to die at home. This stay has changed my mind. The entire time I’ve spent at Fair Havens, I’ve felt comfortable, secure and had the attention to my care that I needed.”

The consultants and nursing team at Fair Havens managed to get Ray’s pain to manageable levels, so he could be discharged in time for his steam train trip – a LNER class B1 engine called Mayflower – which visited Hastings before returning to Southend.

“Within a day of being here, the doctors stopped my medication and started again on a new regime gradually, from a syringe driver to oral painkillers. The team has helped me to carry on with life, like getting showered and dressed, going outside and even climbing the stairs to assess what additional help I might need.

“Then the team focused on helping to get all the equipment I needed to go home and carry on living, like a bed and frame which will mean I can be independent for longer. I don’t want pity. I’m a strong person and have great pride so this was important to me. 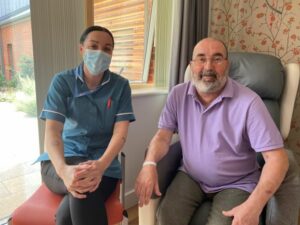 “Everyone here at Fair Havens treats you like a human. Nothing is too much trouble. A small fruit cocktail I had for breakfast every morning. The hot chocolate with one sugar that the night staff remembered every evening. The gentle pat on a shoulder when I needed reassuring. Being called by my name and asked questions about my family. It’s the little things that make the difference. The hospitals don’t have time for that and I understand why. But when you’re dying, that’s what you need – not pity or sympathy, but genuine care and interest in you as a person.

“It’s been a joy to wake up here and as soon as my eyes were open, I was treated as a human being. The Care Team have a great, upbeat attitude which has meant everything. I was scared to come into the hospice. Now I’m sad to leave.

As well as seven children, Ray and Jane have 14 grandchildren. He continues, “When the time comes, and I’m able to come to Fair Havens at the end of my life, that’s what I want to do. But for now, Fair Havens has actually helped me to become stronger. I’m well enough to be discharged and go home so I can enjoy quality time with my family.”

Fair Havens is part of Havens Hospices, an independent charity which also includes Little Havens and The J’s for children and young people with complex or incurable conditions. Its care is completely free of charge, only thanks to the generosity of kind local people making donations.