My story started long before I was born. My Granddad was born and raised in Nigeria, but came over to England – Southend to be exact. The reasons for his long travel are blurred, but my understanding is that he came here to study and work.

He met and fell in love with Jean, a white British lady. I only have one photo of them, taken in the 50’s. It sounds simple, but during these times inter-racial relationships were enough to be ostracized from families and the community.

My Grandad took the three children (my Dad just six months old) to Nigeria, where Nan would join them later. She never made the journey for many reasons.

My father was raised in Nigeria and experienced judgements as mixed race children were unheard of. At age 14, my Grandad died and he recalls being suddenly ‘sent back’ to live with his Mother, without knowing a word of English. He struggled with this transition and never spoke of his life in Nigeria or teenage years in the UK. There were places he couldn’t go, right up until his thirties because of the colour of his skin. It seemed his face didn’t fit in any country.

My Mum is white British, and met my Dad in their late twenties. When I was born, she was used to the racist comments and disappointed looks. But when I was four, my surname was changed, picking the name ‘Wilson’ so that I would fit in.

As a child, I would dream of Africa and one day would go there to make a difference. Dreaming was all I had from my unspoken heritage. I didn’t even realise I looked different until around the age of eight, singing in my garden when a neighbour shouted for me to go back to my own country. My Mum was furious, but I honestly had no idea what she meant.

In primary school, some boys would call me names like ‘browny’ but again I wasn’t entirely sure why. I honestly thought they were a bit odd. Early into high school, we had year group photos and it dawned on me that I didn’t look like anyone else. The racist comments confirmed this, so I started wearing pale foundation and even dyed my hair blonde to fit in with the ‘norm.’

Embarrassingly, this continued to the point that I would joke about myself and my differences just to stay hidden and fit in. My career was bumpy and at many points despite jumping all the hurdles I was overlooked for promotions that I was capable of.

I finally got a job in management and was so proud that I beat the odds. But I soon found out that just four months before appointing me, the organisation had been criticised for only employing white British. It was clear that my role had been given in large as a token.

Their behaviour towards me was also evident of this. I was excluded from meetings and made to feel like an outsider, not to mention the way the CEO spoke to me as if my job was a privilege and I should be grateful. When I finally stood up for myself in a professional way, I was pushed further out and made to feel like a troublemaker. I was always second-guessing and people-pleasing, working harder and staying longer but it didn’t make any difference.

Fast forward 10 years, I joined Havens Hospices – an organisation at the point of cultural change and for the first time I felt accepted for who I am. Black employees told me how inspired they felt to see a similar face in a management position. They told me stories about how they felt their face didn’t previously fit and had similar – often worse – experiences than I had ever had. 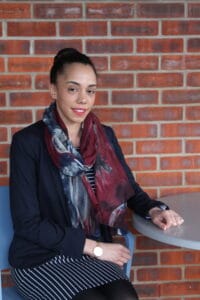 This triggered something in me as I reflected on my family journey. I vowed to be the voice for this group and really make a difference for not only the staff, but also the patients and community.

This started by evidencing the differences in our community and then looking at the people accessing our care services and engaging with community leaders. Like pulling a thread, the organisation started to shift. Three years later, we are making progress. There’s an EDI group, inclusive spiritual care and we are working hard towards diversity and inclusion. There is still so much to do but the journey has begun.

I am saddened to say that racist behaviour made my heritage feel like a secret. My heritage is so important to me and no one should feel ashamed about who they are. They shouldn’t need to adopt a new version of themselves to fit in to society.

I am proud to be me – I am Black but also white British. I am also so very proud of my family and the battles that they faced.

I no longer feel like I need to fit any mould or the tick box of BME/Person of colour/mixed race or ethnic minority in my personal or professional life. I have found a place inside me and within my career where it’s ok to be Chanelle Wilson (formerly Ogunmuyiwa).

Head of Welfare and Wellbeing