Two weeks before his eighteenth birthday, on 5th June 2008, Robert collapsed, banging his head and was taken by ambulance to hospital.

On 21st January 2012, Robert had a major stroke that affected both sides of his body, he spent six weeks in hospital and scans showed that he had developed a ‘white halo’ around his brain which showed higher levels of calcium. It’s called White Matter Brain Disease and this affects his muscles, speech and coordination.

In May 2017, Robert was referred to The J’s Hospice which has made a big difference to the whole family’s quality of life.

His Mum, Kate explains how Robert and the whole family’s quality of life has improved “The Healthcare Assistants pick him up in their wheelchair-friendly vehicle and take him out to social events. He always has a big smile when they arrive. They go to our local YMCA to play boccia which is a type of indoor bowls which he really enjoys, or they go to the pictures and he comes back so, so happy.”

Robert always looks forward to their visits. He explains, “The J’s Hospice carers are nice. They’re always laughing with me when we go over the park and have a cup of tea. They’re good company and they look after me.”

Kate also really appreciates the way that the Healthcare Assistants tailor their visits to Robert’s specific needs. She added, “Robert is getting forgetful which may be the early stages of dementia. The carers play games with him and talk to him about things like current affairs to stimulate him and keep his brain going. They’re full of ideas.

“He also goes to the Inspire! social group which has lots of activities that he can take part in. The J’s staff always recognise him and know what he likes and so he has a great time.”

To find out more about how you or someone you know would benefit from the care at The J’s, please click here.

“The J’s Healthcare Assistants sit with him and always talk to him and that’s what I like – they talk to Robert; they don’t talk around him.”

"You do grieve for the life you had and the one that you’re not going to have, but we’re a positive family and we are always looking forward." 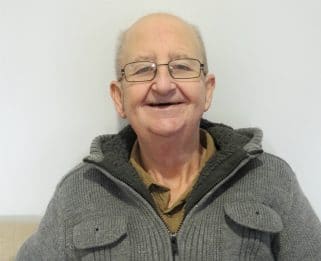 “I’m leaving some money to Fair Havens to look after people.”

“The J’s Hospice is brilliant - an absolute life-saver.”

“Each music therapy session gave me time think about my emotions."